The commune of Bonnes shelters, and boasts, the church of Saint- Pierre and Saint- Radegonde, built in the shadow of the chateau which itself dates from the 16th century.
A little history….. 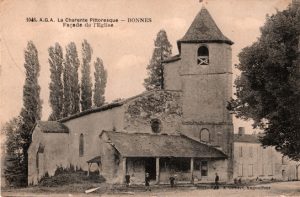 Originally built at the end of the 12th or beginning of the 13th centuries this church, dedicated to Saint-Pierre and to Saint Radegonde, has seen several periods of construction. The two chapels, the bell tower and the façade were built during the first part of the 16th century. During the 19th and 20th centuries numerous works were carried out; a plaster ceiling in 1863, the sacristy was built in 1896, and the stained glass windows were restored by the celebrated Bordeaux artisan, Dagrant de Bordeaux.
The church also houses a clock dating from the 16th century, which is without doubt one of the oldest in the department. The clock was designated a Historic Monument in 1943. 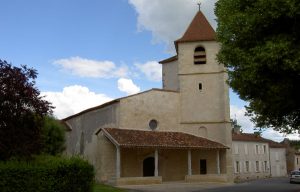 To see…..
The church boasts a number of features dating from the renaissance ( chapels, the great door, bell tower and its bell), and it was these major features which led the church to be classed as a Historic Monument in December 1995. There is little evidence of the renaissance in the Charente’s architecture, especially in its churches, making the renaissance features of the church of Saint-Pierre et Sainte-Radegonde even more precious.
A little tour inside…
The plan of the church forms a rectangle, comprising the nave and the “chavat plat”. The building is flanked, from the third row of the nave, by two lateral chapels.
And outside… 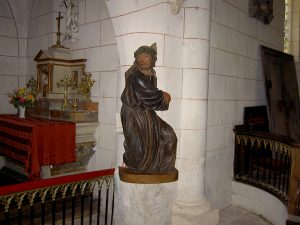 Although partly hidden by the canopy which protects it, the renaissance period great door is particularly remarkable. The tops of the small columns which support the arch, in the form of basket handles, are beautifully decorated with foliage.

BonnesThe small alcove must have been occupied by a statue which has, unfortunately, disappeared. The two small figures, “putti”, holding a crown, as well as shells and foliage, are decorative elements characteristic of the renaissance style. The square bell tower is crowned by a pavilion roof, covered with flat tiles. Its position, on the south angle of the façade, is an odd situation, which gives the building an irregular and curious character.

Whilst erosion has led to the disappearance of almost all the funeral litres painted on the exterior walls of the church, those inside have proved more resistant. Funeral litres are therefore often visible in many churches, even if the coats of arms were largely suppressed during the French revolution. In the nineteenth century the interior of the church was covered in a white wash decorated by a false appearance of stone. In the choeur is a beautiful carved, wooden altarpiece, dating from the eighteenth century and also protected as a Historic Monument, and decorated with three painted canvases  featuring Saint –Pierre and Sainte – Radegonde, in a representation of the scene of the Annunciation. 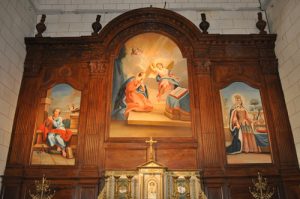 In a third chapel, backing on to the south chapel, you will find the baptistry. BonnesThese chapels, with their ribbed vaults, were originally dedicated to Saint – Joseph and to the patron saint of the church of Bonnes, Saint- Radegonde, a pious, Frankish queen who dedicated her life to God, and who founded the monastery of Sainte-Croix in Poitiers, where she died in 587.

Today the altars of two of the chapels are dedicated to the Virgin Mary. The north chapel has retained traces of a funeral litre with the crest of arms of the Lord Bouchard d’Esparbés de Lussant. This black band, punctuated by heraldry, was painted on the interior and exterior of churches to mark the funerals of Lords of high standing. 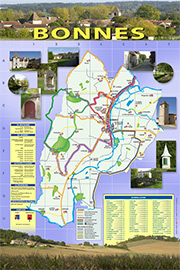 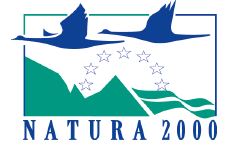 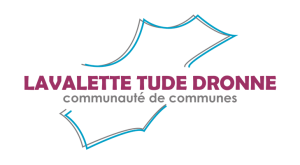